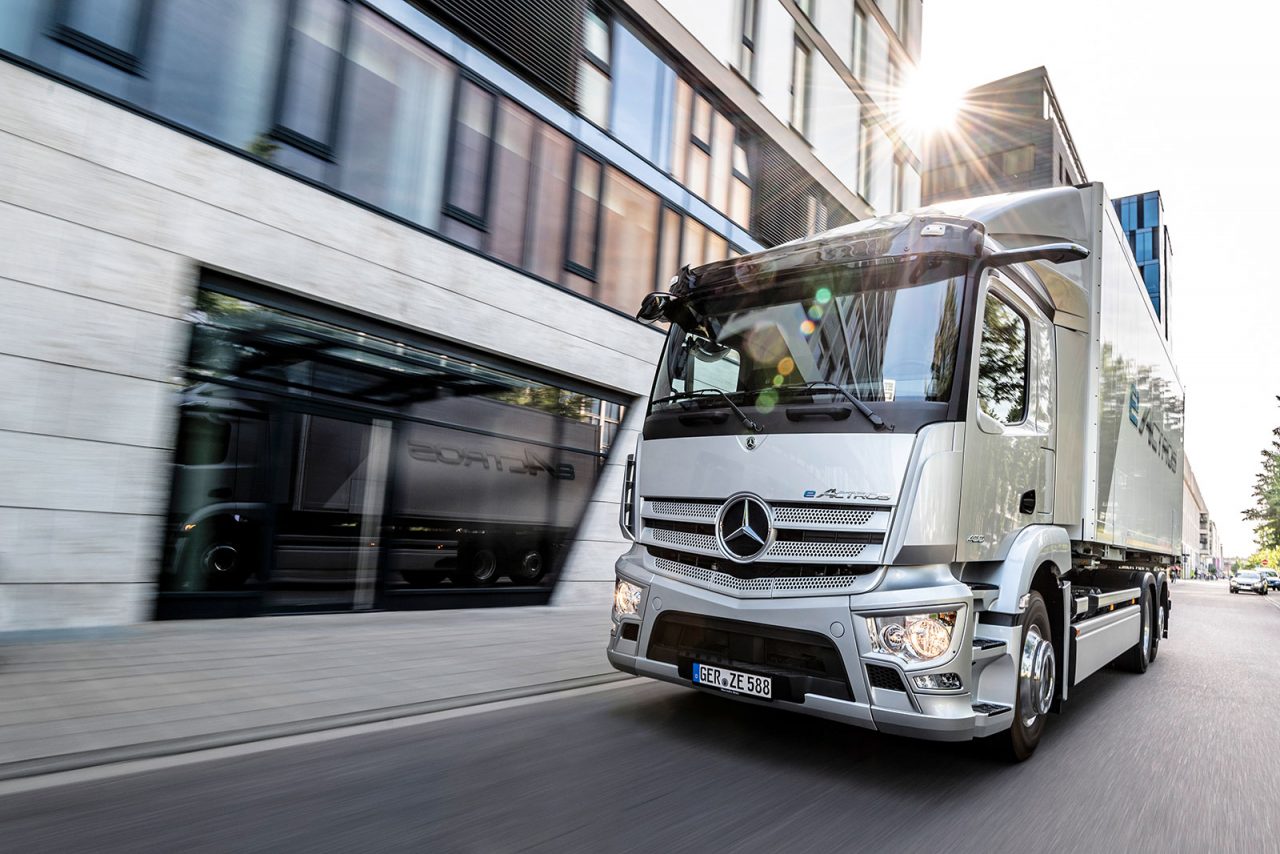 Mercedes-Benz Trucks have celebrated the world premiere of its battery-electric eActros for heavy-duty short distribution. With the first series-produced electric truck to bear a three-pointed star, Mercedes-Benz Trucks is ringing in a new era and simultaneously highlighting its clear desire to achieve CO2-neutral road-based goods transport. The standard model of the eActros is planned to roll off the production line in Wörth am Rhein, Germany, from later 2021.

While the chances of seeing an eActros in Australia any time soon is unlikely, Mercedes-Benz Trucks Australia Pacific director Andrew Assimo says the company is working toward the model eventually lobbing down under.

“We are very excited about groundbreaking Mercedes-Benz electric trucks and buses, including the pioneering eActros,” Assimo says. “We are not yet in a position to confirm any local electric model introductions, but are certainly working towards making these exciting vehicles available in Australia and New Zealand at the appropriate time.”

The findings from the ‘eActros innovation fleet’ which started in 2018 and consultations with customers are said to have been incorporated into the development of the series-production model. Alongside this, proven features such as MirrorCam and the Multimedia Cockpit Interactive have been adopted in the standard specification. 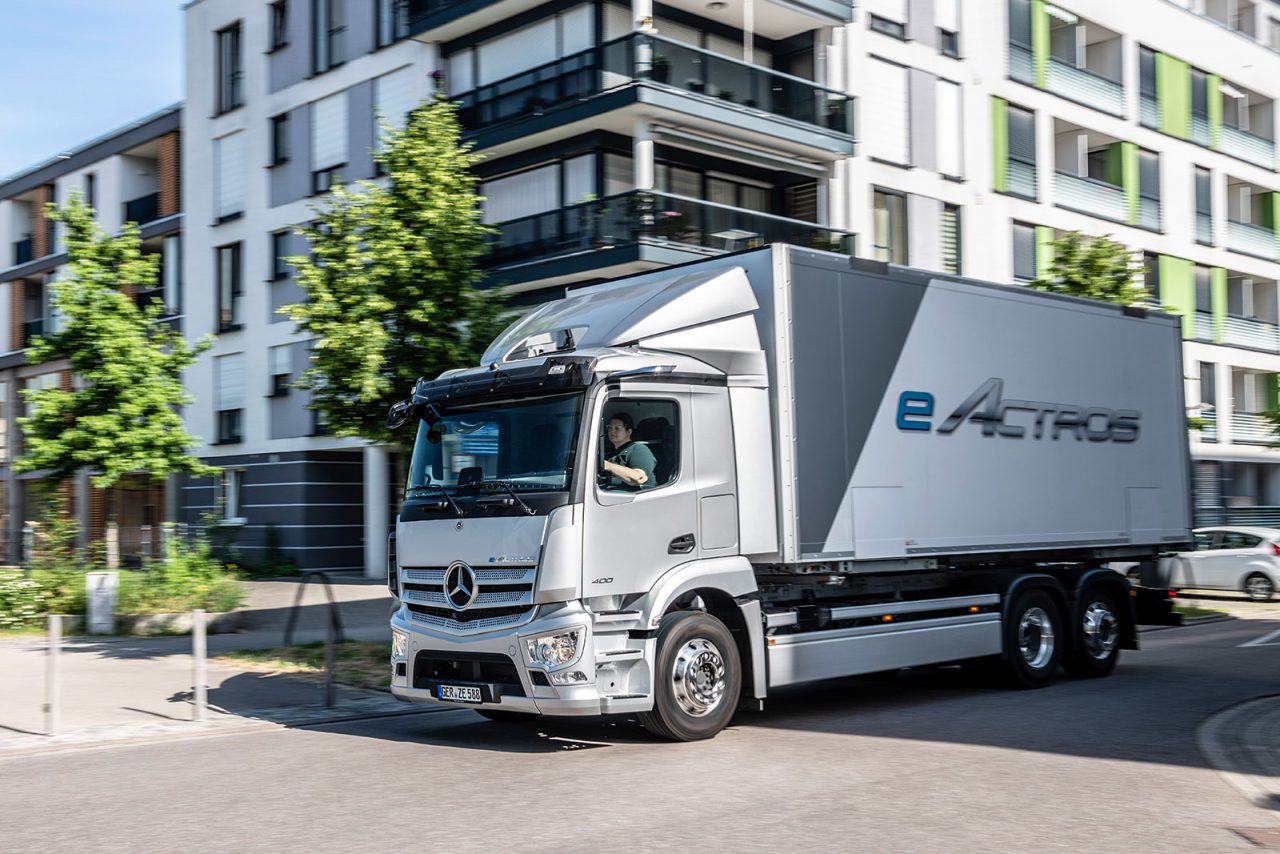 The battery of the eActros series-production model is equipped with either three or four packs, each with an energy capacity of around 105 kWh. The maximum capacity of 420 kWh enables ranges of up to 400km, the company says. The technological centrepiece of the electric truck is the drive unit – a rigid electric axle with two integrated electric motors and a two-speed transmission.

Both liquid-cooled motors generate a continuous output of 330kW as well as a top performance of 400kW. Plus, if the vehicle is driven particularly foresightedly, recuperation enables the vehicle to recover electrical energy. The energy obtained in this way during braking is fed back into the batteries of the eActros and is again made available for use by the drive system.

The two integrated electric motors offer efficiency and a constant delivery of power with high starting torque, Mercedes-Benz notes. The provision of immediate torque by the electric motors, which are coupled with a two-speed transmission, are said to ensure powerful acceleration,  driving comfort and driving dynamics that “enable more relaxed, low-stress driving than a conventional diesel-powered truck”. Plus, the low centre of gravity is also favourable when it comes to cornering. In full-load operations, drivers enjoy a pleasant noise reduction of 10dB inside the cab, which roughly corresponds to a halving of perceptible noise volume.  The company notes that the low noise level, night-time deliveries are also possible, a significant issue given European city regulations.

The eActros can be charged with up to 160kW. When connected to a regular 400A DC charging station, the battery packs need little more than one hour to charge from 20 to 80 percent. 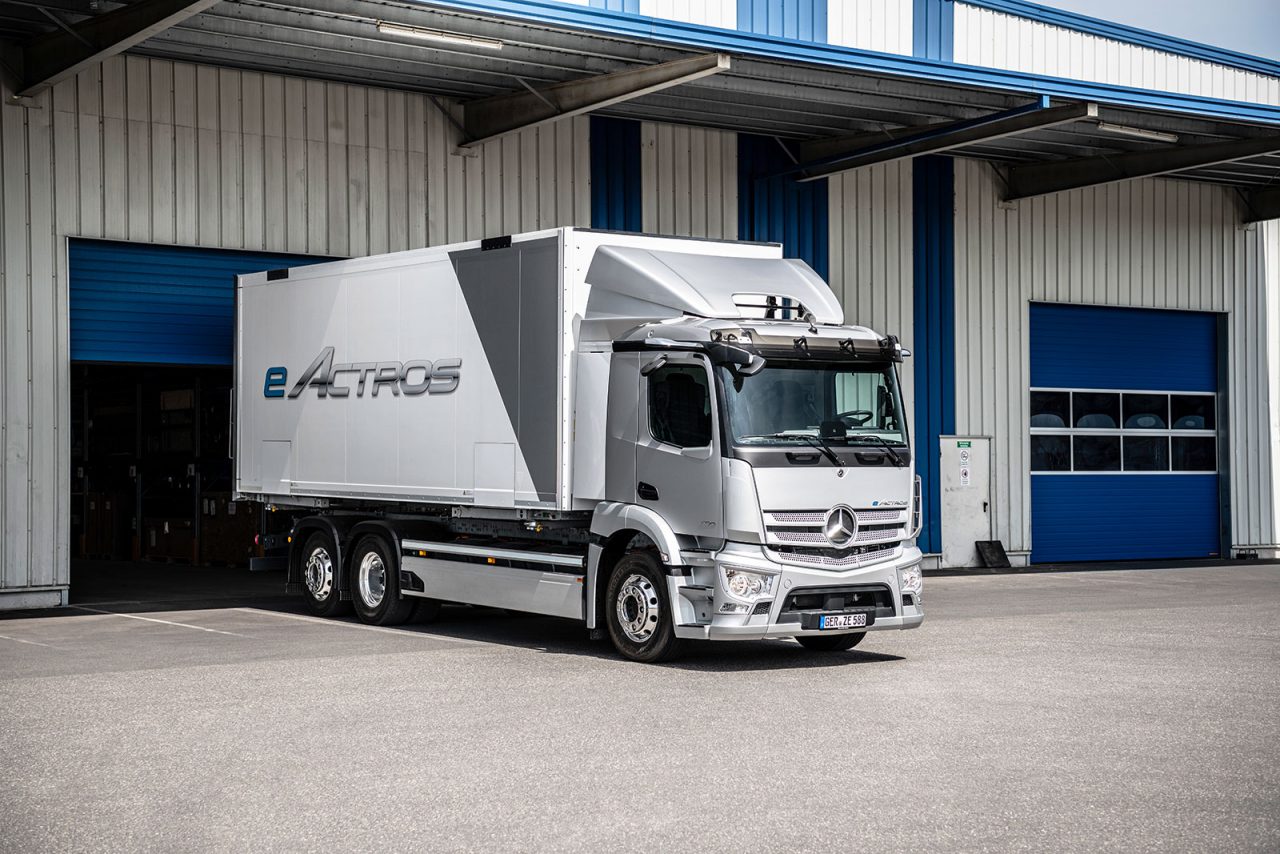 In order to assist transport companies into e-mobility, Mercedes-Benz Trucks has embedded the eActros in an eco-system that also provides advice and services, as well as a range of digital solutions to increase capacity utilisation of the vehicle and to optimise the total cost of ownership.

“For example, using a customer’s existing route plans, it is possible to establish a highly realistic and meaningful usage profile for electric trucks,” Mercedes-Benz says. “This so-called eConsulting doesn’t just include electrification of the depot, but – if the customer desires – also covers questions concerning planning, applying for and implementing everything to do with the charging infrastructure and connection to the electricity network.”

To this end, Mercedes-Benz Trucks has established a strategic partnership with global renewable engergy firm Engie, which also has an Australian presence, and charging-station firm EVBox Group, which doesn’t. If required, Mercedes-Benz Trucks can additionally provide help with identifying any available public grants for infrastructure and vehicles.

Using the Multimedia Cockpit Interactive, which comes as standard in the eActros, the driver remains constantly up-to-date with the charge level of the batteries and the remaining range, as well as the current and average energy consumption. Fleet managers can use the Fleetboard portal’s digital solutions to efficiently control their fleet. This includes such things as an individually developed Charge Management System for creating charging profiles, and a logbook containing detailed information on driving times, downtimes and charging breaks. There is a mapping tool which shows the vehicle’s current location in real-time, as well as whether it is in motion, parked or being charged, not to mention how high the battery charge is.

Equally always included with this is intensive customer support through Mercedes-Benz Uptime. As part of this, fully automatic telediagnosis continuously monitors the status of several vehicle systems in the truck in real time. “By bundling repair and maintenance requirements, the number of unplanned workshop visits can thus also be reduced,” the company says.

Safety features for all concerned include special crash elements with an aluminium profile to protect the batteries in the event of a side-on crash, while sensors integrated in these can detect a crash scenario. In such a case, the HV battery would be automatically isolated from the rest of the vehicle. Also, the driver always has the option of actuating the HV shutoff at any time in the cab. To ensure the vehicle is easier for road users like pedestrians and cyclists to hear, the eActros comes as standard with an external Acoustic Vehicle Alerting System (AVAS), Sideguard Assist and the fifth-generation Active Brake Assist emergency braking system with pedestrian recognition. This can help to reduce the risk of a collision in the longitudinal direction on urban streets, out-of-town roads or motorways.