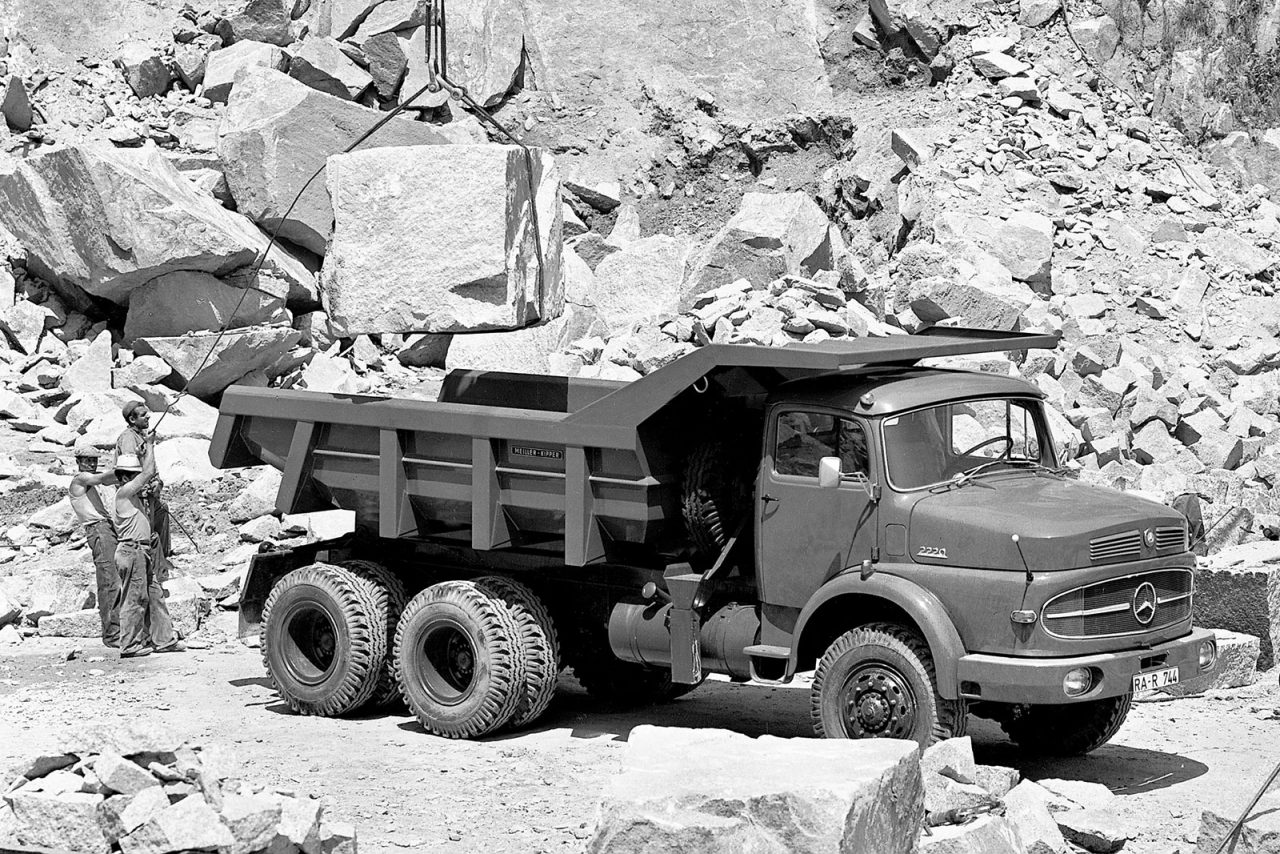 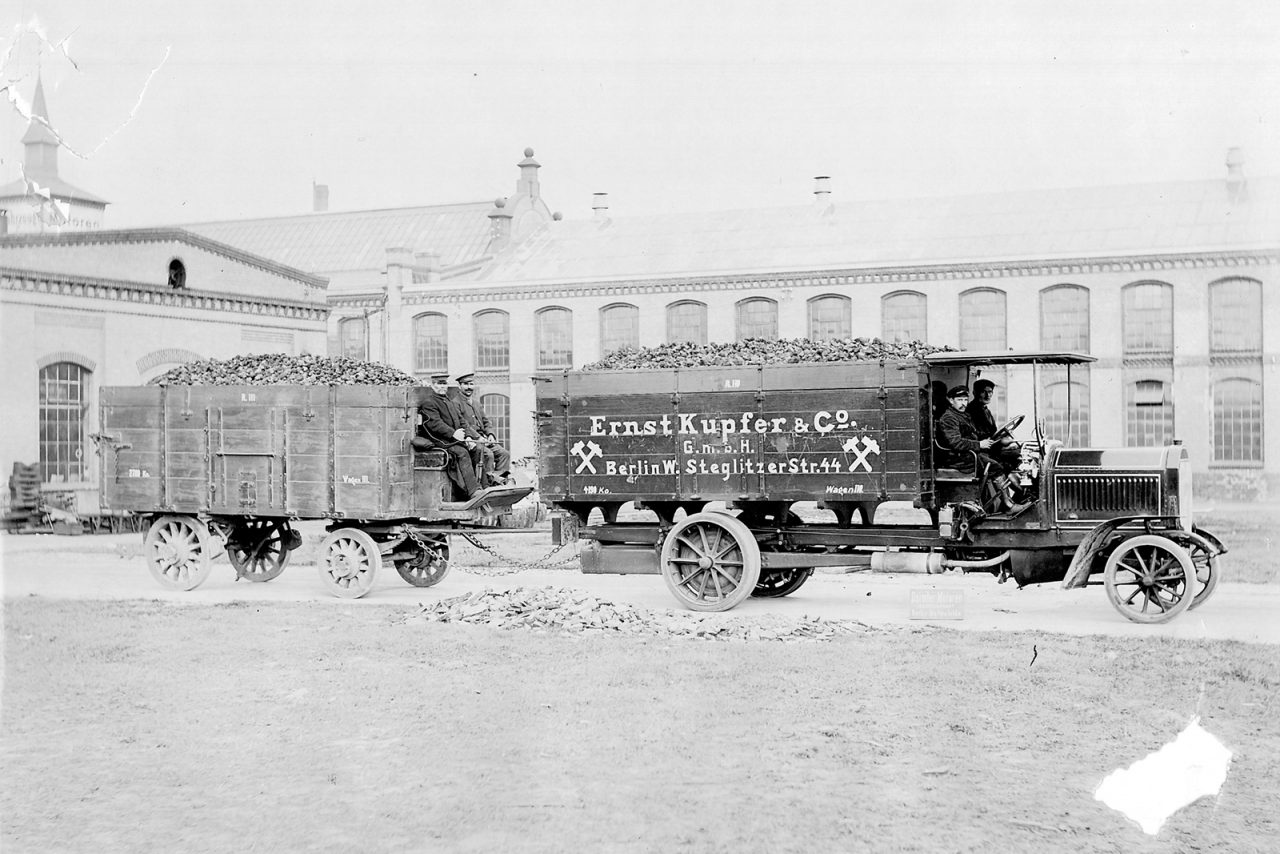 Gottlieb Daimler introduced the world’s first truck at the end of the 19th century. The new trucks were not only used for general cargo transport but were also quickly discovered by tradesmen and builders for transporting tools and building material. In 1897, just one year after Gottlieb Daimler invented the truck, Daimler-Motorengesellschaft (Daimler Motor Corporation) was able to showcase a vehicle with a payload of five metric tons. The new 5-ton truck was used for the first time to transport building materials, as Daimler personally carried out the test drives at a roof tile factory.

The introduction of so-called winched tippers in 1904 paved the way for heavy bulk cargo transport: A loading bridge could be raised on one side using a crank and rack. Only two people were able to handle five tons of cargo with a corresponding transmission of the crank using only two winches per truck. This procedure remained state-of-the-art until the 1920s, when the hydraulic tipper press successively replaced the manual work on the dumping body. This was the birth of the three-way dumper truck: The hydraulic strut as a driving force made it possible for bulk material to slide off in three directions instead of just two. 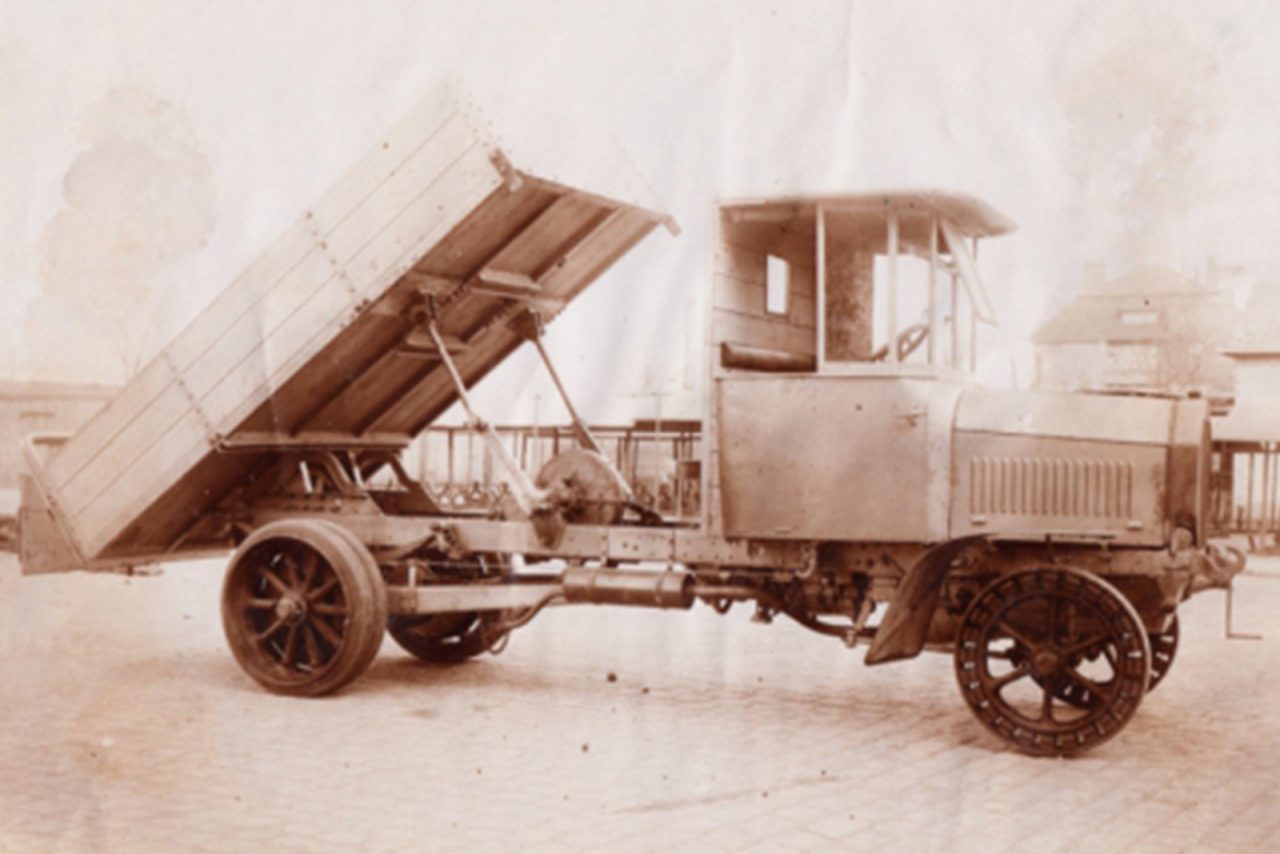 Forward-thinking technology in the first truck

It is remarkable that the first truck 125 years ago anticipated the planetary axles that are still common today, especially in construction vehicles: The belt transmission sends the power of the engine onto a shaft mounted across the longitudinal axis of the carriage, the two ends of which are provided with a pinion. Each of these pinions now engages in the internal gearing of a ring gear, which is firmly connected to the wheel to be driven. In modern planetary axles, this shaft ends in the wheel hubs in a sun gear connected to 3 to 5 planetary gears. These run on a stationary ring gear and thus drive the wheels. This is how, in principle, the planetary axles of heavy Mercedes-Benz trucks have been working ever since right up to the current Arocs series.

With the exception of the ten-tons vehicle, such as the three-axle LK 10000 from 1937, Mercedes-Benz was able to increase the payload of the dump truck in the pre-war period. This was one of the first real heavy-duty trucks on the road. The powerful vehicle had an output of 150 hp and a double-drive rear axle (axle configuration 6×4). 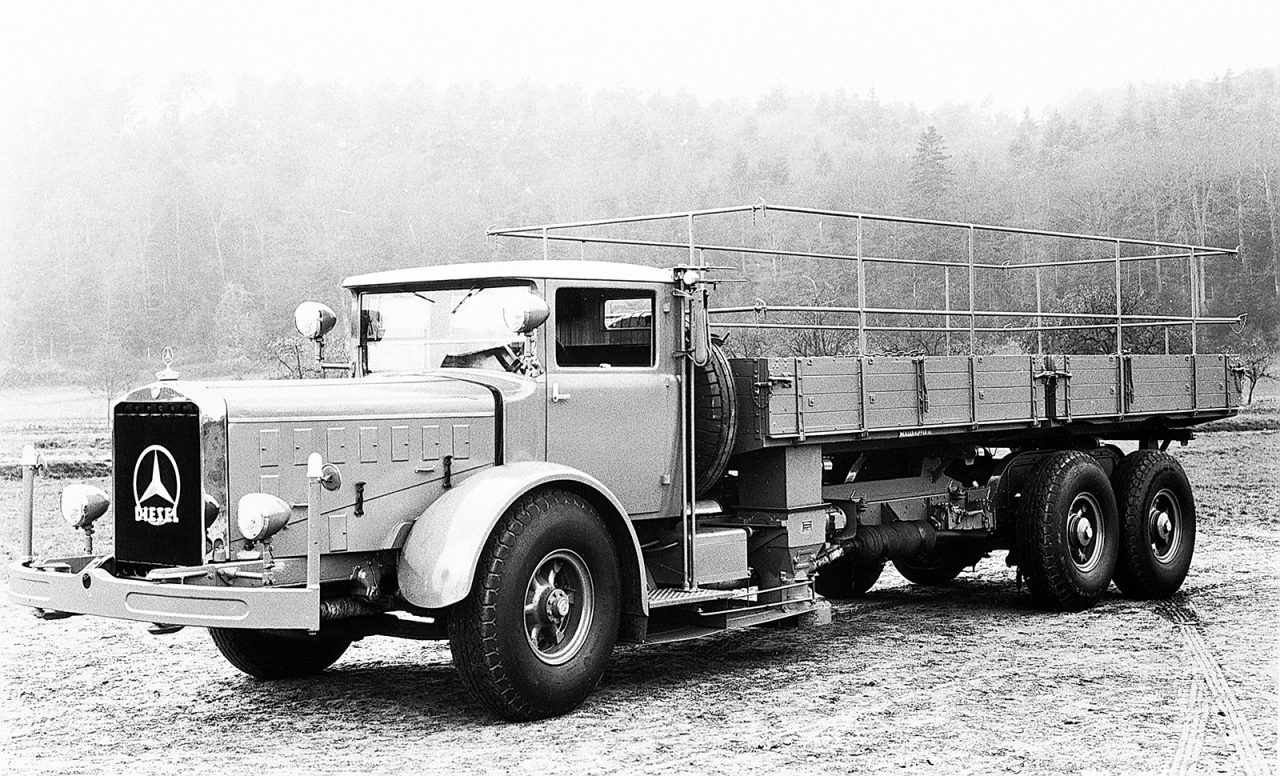 The biggest tipper in the pre-war era was the three-axle LK 10.000.

Post-war production was quickly getting back on its feet. The provisionally improvised L 4500 with its square wooden cab was born at the heavily destroyed Gaggenau factory.

Launched in 1949, the bestselling L 3250 was one of the tough pragmatists that helped the Federal Republic of Germany, which was founded in the same year, set course for the economic Miracle on the Rhine. A somewhat heavier vehicle that joined the team in 1953, helped out. Known as the L 4500, then called the L 312, it was extremely successful in supporting the 3.5-ton truck as an almost identical vehicle – with just one ton of added payload. These new models both immediately became market leaders in their class and were able to easily maintain this leading position until they were replaced in 1961. 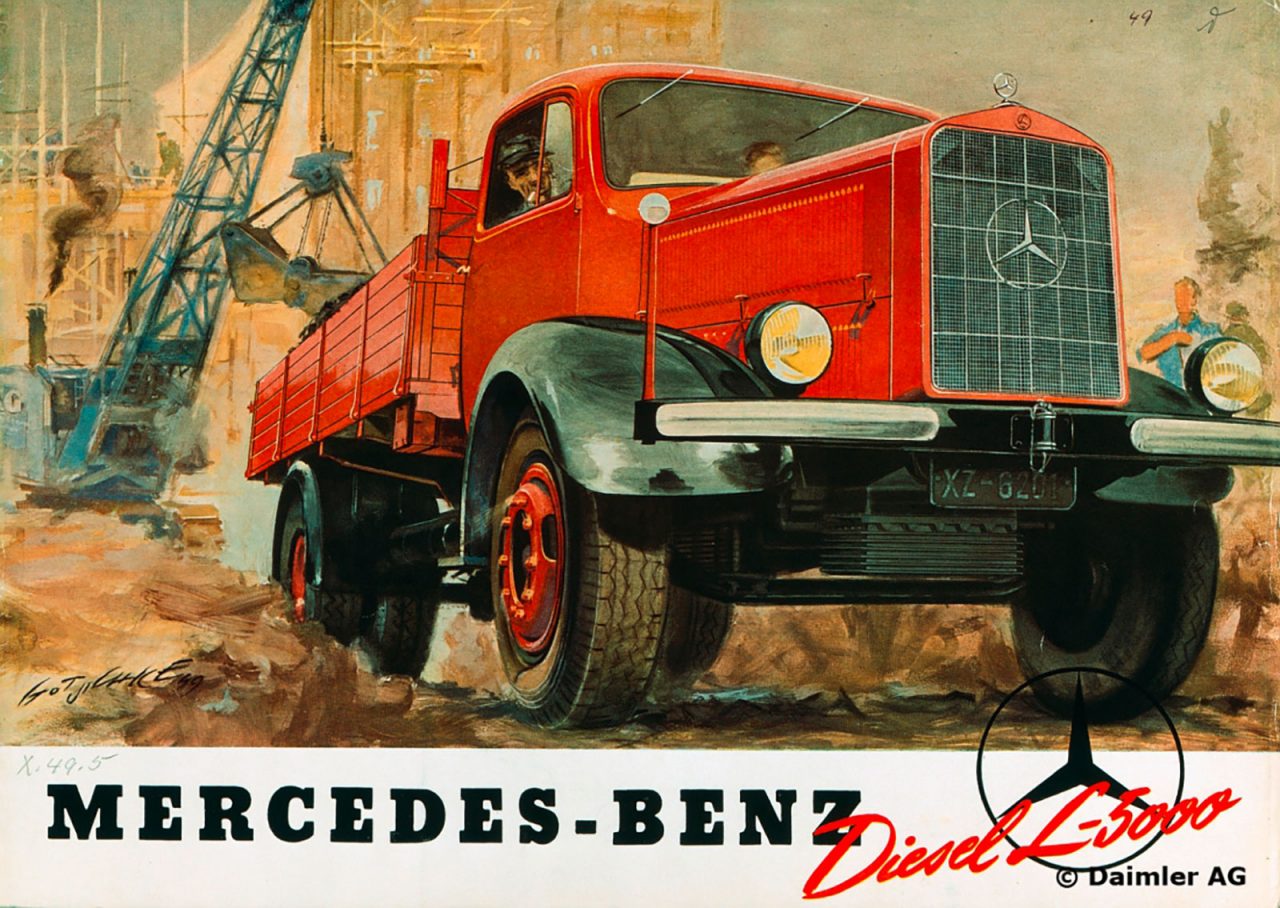 As a further milestone, the L 6600 with a higher payload of 6600 kilograms was the first new development at Daimler-Benz in 1950. The L 6600, a vehicle fully focused on the heavy-duty class, with its 145 hp and 8.3 litre OM 315 pre-chamber diesel engine was produced at the Gaggenau plant. By the mid-1950s, heavy two-axle dump trucks, such as the LK 6600, were added to the range. However, it took until the 1960s before Daimler-Benz also manufactured three-axle vehicles for construction. 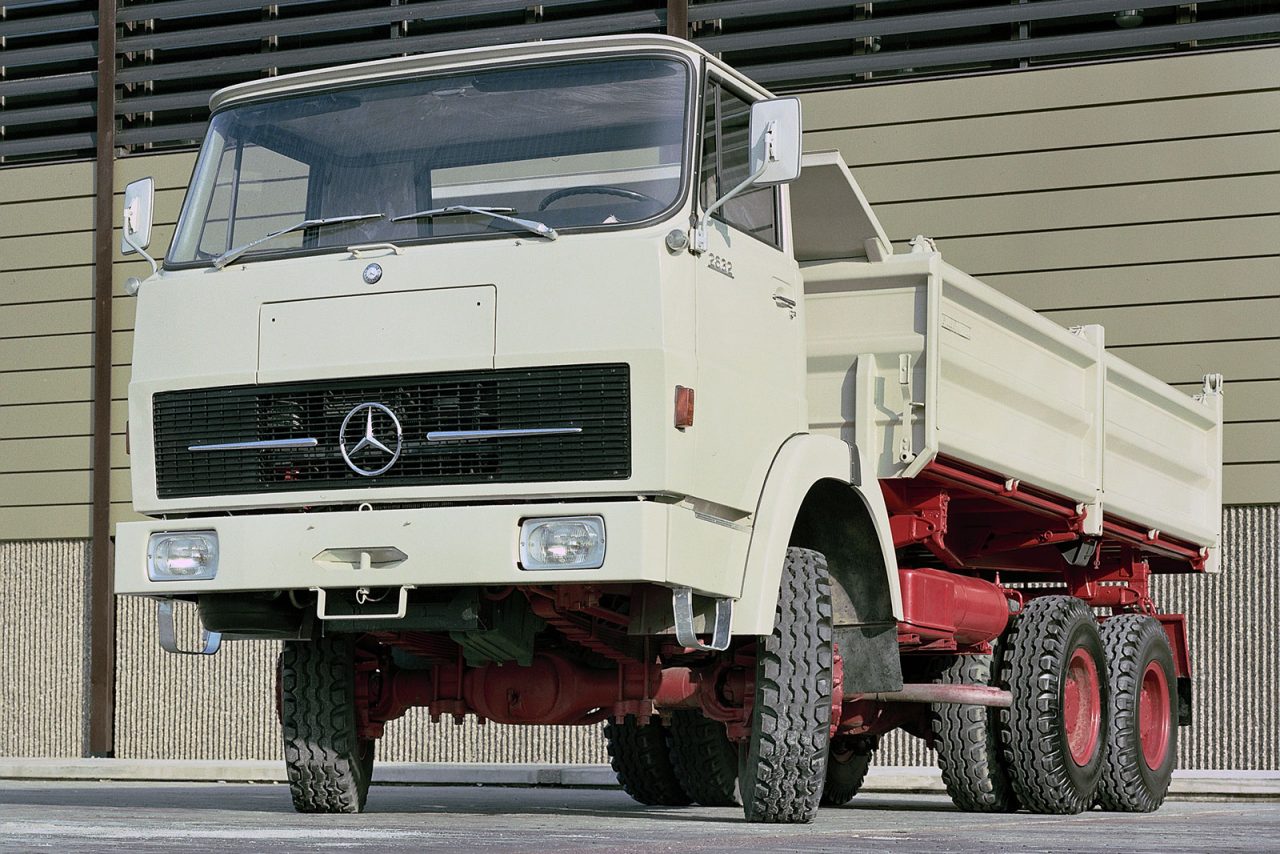 As a compromise on wheels, the new Daimler-Benz short-nosed trucks, first introduced in March 1959, were born. New and particularly rigid regulations in terms of the dimensions and weights introduced by the Minister of Transport Seebohm, brought the end to traditional long-nosed trucks, which, with their imposing noses, were suddenly accused of wasting space at the expense of the loading space.

The time had come to shrink these hoods a little. This was because the designers were forced to create as much space as possible for the loading space within limited external dimensions and, on top of that, to build as lightly as possible in order to ensure a maximum payload with a rigidly limited total weight. It seemed to be too daring for designers to switch completely to the COE design that had already come into fashion abroad. It was not clear whether the COE principle would prevail in the long term and whether customers would approve of such a radical step.

A key advantage of the short-nosed design compared to COE trucks: The engine only protruded modestly into the short-nosed cab and thus offered a kind of climb-through. This left enough space for a third seat between the driver and co-driver and less heat and noise got into the cab. The engine in the short-nosed variant was more accessible in any case. And it would still take years before the first tipping COE cabs would be produced.

The new short-nosed vehicle came in three weight classes: The L 322, designed for a gross vehicle weight of 10.5 tons, was a typical medium-duty truck, intended primarily for local transport and for jobs that were not too heavy in the construction industry. With a total weight of 12.0 tons, the factory also added the heavier L 327 in spring 1959, which used this capacity to exploit the maximum permissible total weight in accordance with Seebohm’s regulations. Finally, the L 323 (later L 710) took over from the L 311 (formerly L 3500) and attempted to be an early representative of the 7.5-ton class (GVW) in terms of the total weight.

The heavy versions of the short-nosed trucks in particular had long proven to be a real export hit. While the production of the light and medium-duty short-nosed trucks – depending on the model – ended between 1976 and 1984, the heavy-duty two-axle vehicles L 1924, L 1928 and the three-axle vehicles L 2624 and L 2628 remained in production for export for many years to come. It wasn’t until the mid-1990s that a short-nosed L 1924 was the last of its kind to roll off the production line in Wörth.

However, two things were to be added to the range: on the one hand, a COE truck with all-wheel drive and, on the other hand, a very short cab for COE trucks. For example, the heavy LP was only available with a medium-length or long cab. An unusual approach was applied to offer the LP, that was about to be discontinued, as an all-wheel drive vehicle: COE trucks by Hanomag-Henschel, a company which had recently become part of the company, would be combined for the short term with Mercedes-Benz’s own V-engines as well as transfer cases and planetary axles. 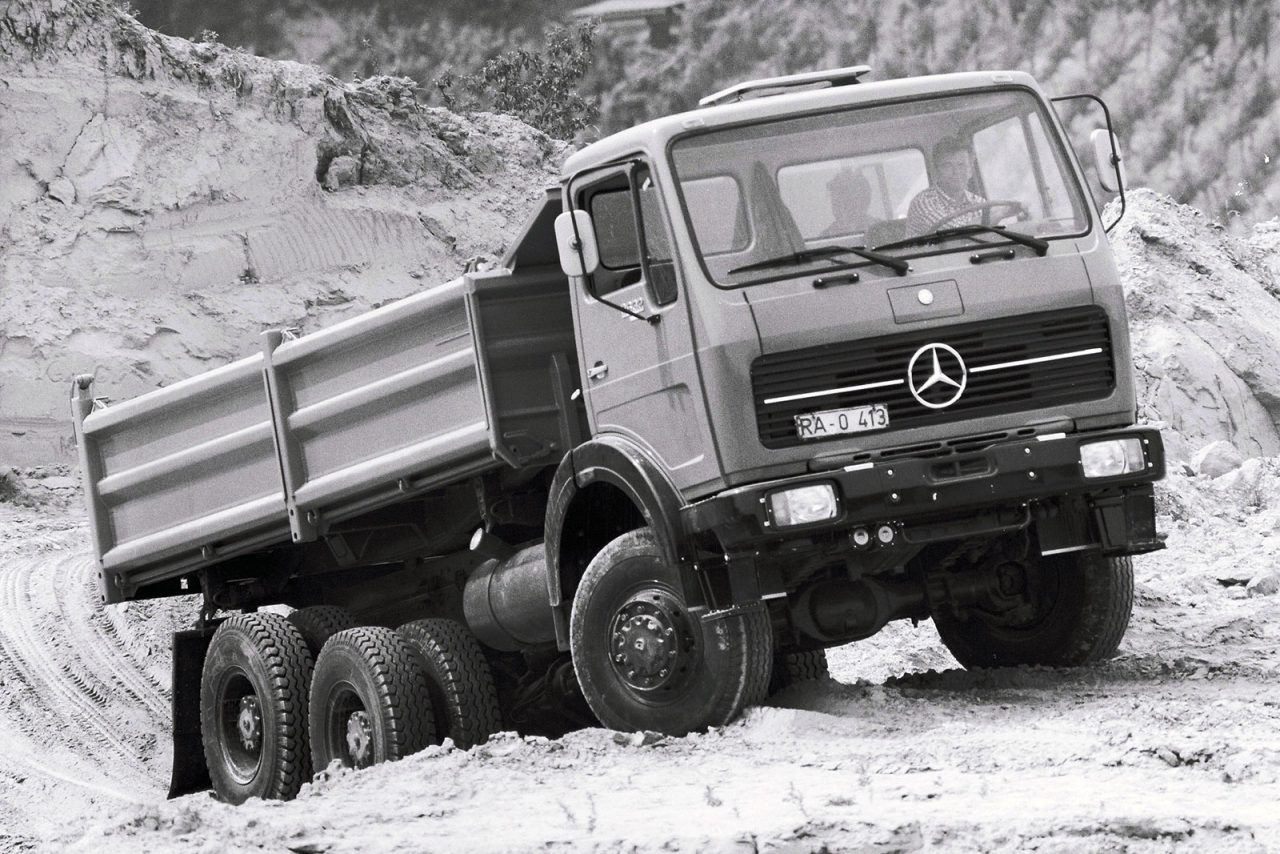 For example, the 4×4 and 6×6 axle configurations were now also available as COE trucks until the “New Generation” in 1973 brought a completely new and clearly structured model range to the previously somewhat unstructured heavy-duty truck range. The NG (New Generation) and later the SK/MK (Heavy/Medium-heavy Class) was introduced at the beginning of the 1970s. It was noteworthy that the press presentation first took place with the construction vehicles, the long-haul transport versions only came later.

NG 80: From 1980, the vehicles of the new generation would be available with revised modular engines in V design as NG 80 with optionally six, eight or ten cylinders; the in-line six-cylinder engines would continue to be part of the range.

NG 85: A third and final revision took place in 1985. The OM 442 engine installed in the NG 85 was the first diesel engine in the world for a truck to have an electronic engine control unit (known as electronic diesel control (EDR) at Daimler-Benz). As of 1987, the NG 85 was also available as a four-axle vehicle with 8×8 axle configuration. Daimler-Benz built two four-axle models, the 3528 AK with an OM 422 naturally aspirated V8 engine and the 3535 AK with an OM 442 A turbocharged V8 engine without intercooler. Both vehicles were designed for a permissible gross mass of 35,000 kg. Initially, the four-axle vehicles were built at NAW, a special Group subsidiary based in Arbon, Switzerland. Wörth later took over production.

As of 1988, the new generation became the Mercedes-Benz SK heavy-duty class. Construction vehicles were now also optionally available with cab comfort suspension from long-haul transport vehicles. The new SK heavy-duty commercial vehicle series showcased new diesel engines, modified cabs, new transmissions and chassis as of a gross vehicle weight rating of 17 tons. The heavy-duty vehicles were produced until 1998 and then replaced by the Actros, which would be offered in parallel from 1996 on. 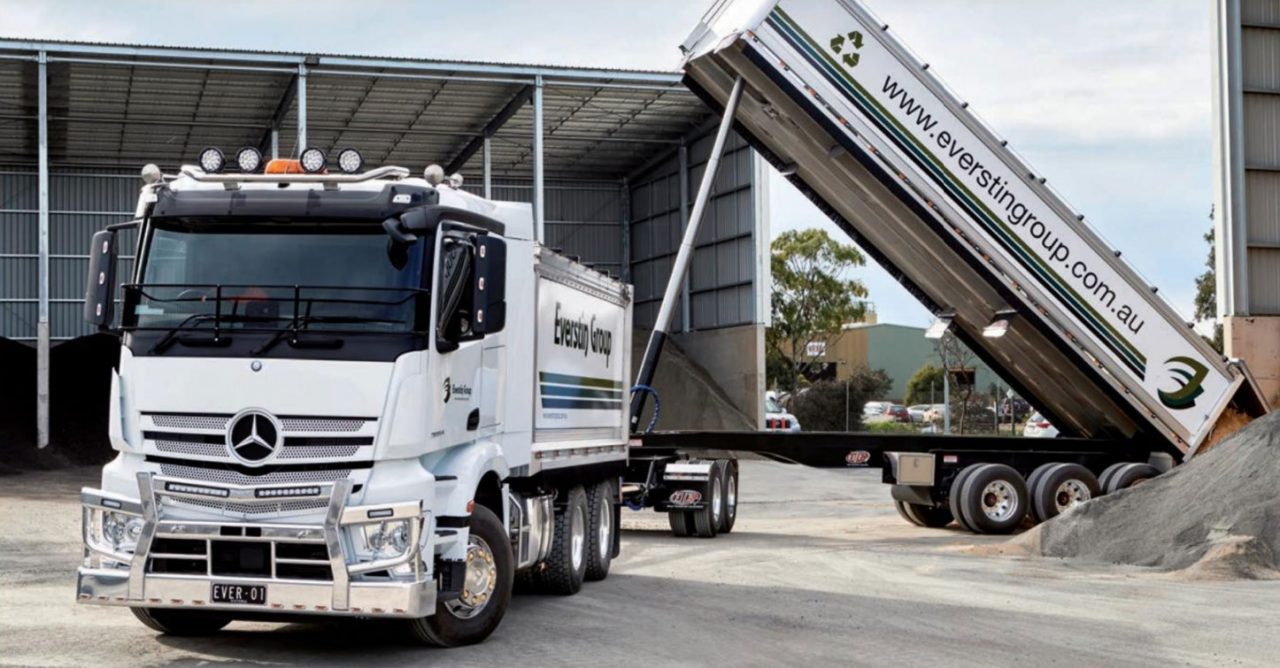 25 years ago: refinements increased with the introduction of the Mercedes-Benz Actros

Mercedes-Benz launched the Actros 25 years ago, especially for long-haul transport and construction sites. Its first generation, introduced in 1996 for the 100th anniversary of the truck invented by Gottlieb Daimler in 1896, marked the start of a series that remains one of the leaders in its segment to this day.

The fact that every Actros generation is awarded the title of “International Truck of the Year” by commercial vehicle journalists from all over Europe has also proven the extraordinary success of this model. According to the panel’s rules, the title is awarded annually to the truck that has made the biggest contribution to innovations for road transport in terms of efficiency, emissions, safety, drivability and comfort.

The reliable, robust nature and planetary axles were retained in the first Actros design dating back to 1996, but the number of refinements has been increasing: Parabolic instead of trapezoidal springs, hydraulic-pneumatic gearshift system, a new front axle load compensation for the four-axle vehicles and, last but not least, an optional off-road EPS are the highlights that the new construction truck from Mercedes-Benz provides.

In 2003, an automated gearshift system was installed as standard when the second Actros generation was introduced for construction vehicles. Drivers were delighted about the new, ergonomic interior with its high-quality appearance and workmanship. Operators have been appreciating maintenance intervals that are twice as long as before.

The third Actros generation was introduced in 2008. The Actros off-road version now offered protective plates for the engine and radiator as well as the fuel tank and was even better equipped to withstand the risks of rough off-road use.

The new Actros for long-distance haulage, also known as Actros 4, was introduced in 2011. The fifth Actros generation followed at IAA in 2018. 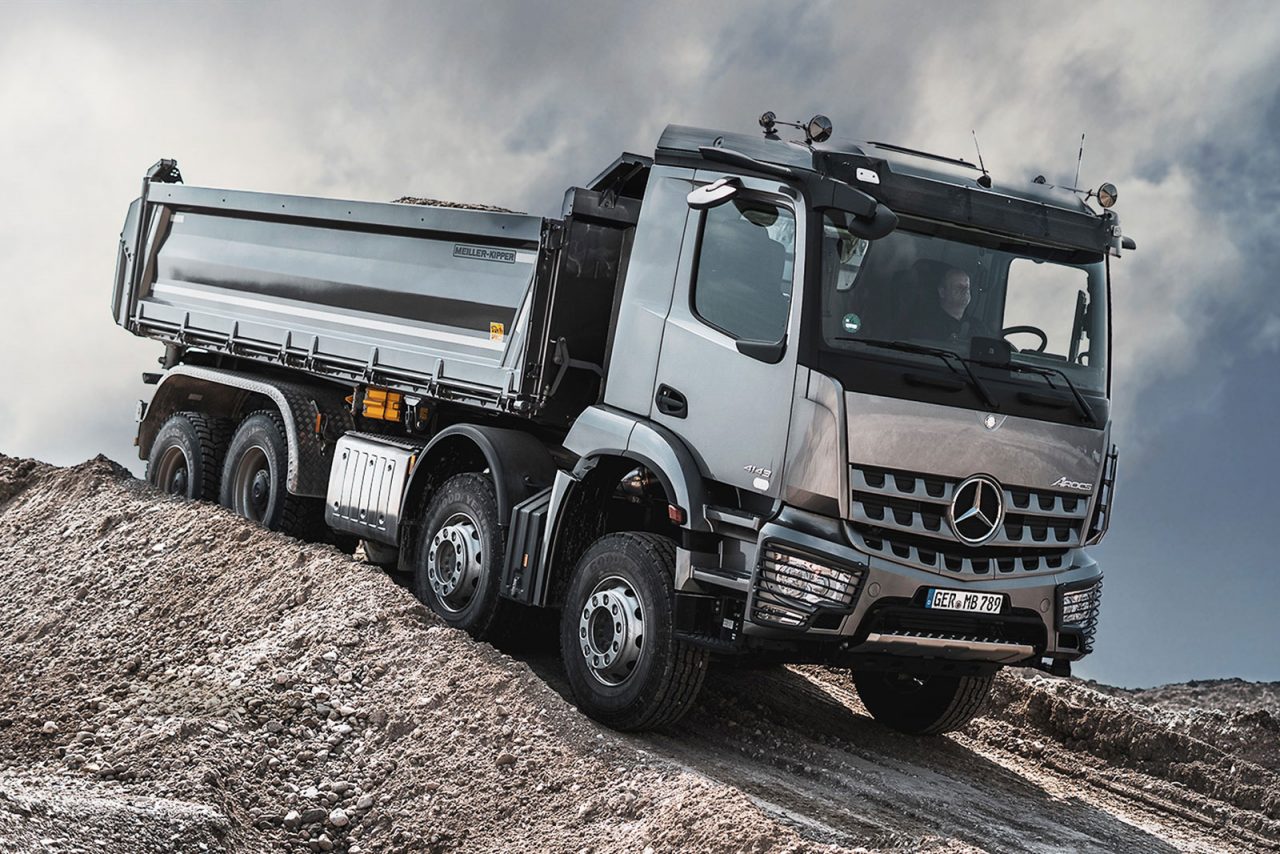 The current Arocs for the construction site – introduced at bauma in 2019 – carries on with the continuous development of commercial vehicle technology with numerous technological innovations.

Like the Actros, the Arocs is the first truck to feature a MirrorCams instead of a classic outside mirror. Another highlight in the new Arocs is the multimedia cockpit with two large, free-standing displays, which offer the driver excellent operating and display convenience. Emergency Brake Assist 5 is available for the Arocs. Thanks to pedestrian recognition, it is automatically able to initiate emergency braking to standstill when required. With the exception of the concrete mixer, every Arocs also features Predictive Powertrain Control (PPC) in an improved form as standard. The PPC can demonstrate its strengths especially in construction transport with many, often only short, on-road trips. Here, the system takes the strain off the drivers and helps them save fuel in the long term.